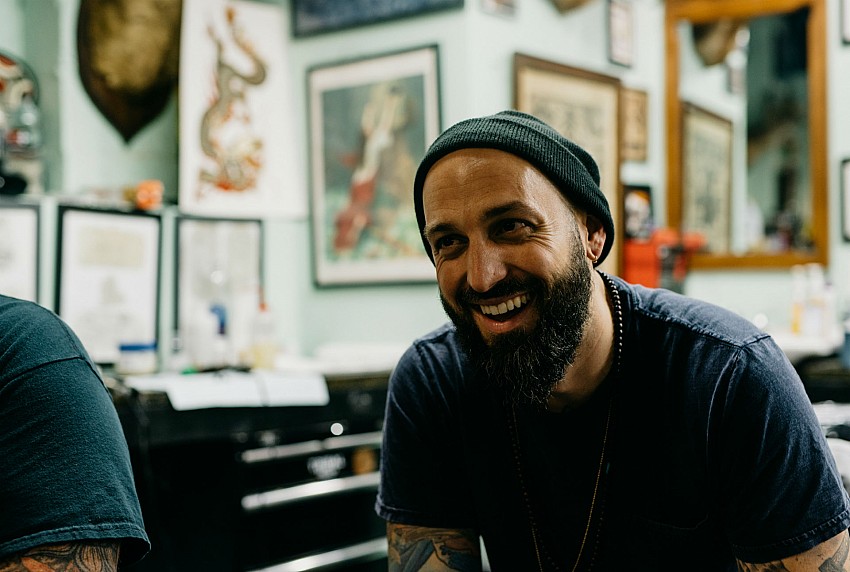 Born and raised in Wichita Falls, TX, Russ Hickman was an 80’s kid who loved sports, drawing, skateboarding and playing drums.  In 2001 he moved to Nashville, TN to study Music Business at Belmont University.  The start of this new chapter in his life brought about many new experiences and life changing moments,  including booking many punk, Indie, and hardcore shows, while also playing in a band himself.

Eventually, this led to a career of traveling the globe, as a tour manager, with bands & artists like Underøath, MuteMath, Every Time I Die & Billy Ocean.  While on tour, Russ began to draw again & get tattooed...a lot. As it does; love changed his path...love for a girl named Jill.  Not desiring to be away from home for 10+ months out of the year anymore, Russ decided that tattooing would be the next big adventure for him...& an adventure it has been.  Now, as a professionally licensed tattooer and free-lance artist, Russ still is involved in music, plays some drums from time to time, still plays some sports (when his old man knees let him).  He still travels a lot & gets to now provide for his wife, Jill & their two sons Addison & Grayton while still drawing...a lot.

Russ Hickman, the tattooer, is really just the same 80’s kid…at a different age and with a few extra responsibilities...but, is still as focused, driven and passionate about loving what he does and doing it with the purest form of excellence and positive human interaction as he can. He is so excited to join in on the fun on the PARAHOY adventure; listening to music, being in creation, hangin with friends & being able to do what he loves in meeting new people and tattooing. Russ would like to thank Brian Stover & everyone at Kingpin Tattoo Supply for being the best tattoo supplies provider around and for sponsoring him for this event!  For the love of human interaction, creativity and trust...it’s time to make some tattoos on a boat!!!